The Raymond Rodriguez from a few years ago wouldn’t recognize the guy he is today. He’s left his slacker ways far behind him and is now juggling two jobs and school. But the balancing act doesn’t allow much time for the man he loves.

David is doing his best to be supportive, but problems at work and his own insecurity leave him frustrated—in more ways than the obvious—whenever he goes to bed before Raymond gets home. The heat and affection between them is still there, but they barely have the time or energy to enjoy it. And it doesn’t help that Raymond is still hiding David from his colleagues.

The stress mounts so high that a vacation in paradise is filled with turmoil instead of harmony, and culminates on their return to the five boroughs with broken promises and heartache. They have to figure out how to stop allowing their differences to overshadow their love. It’s the only way they’ll make it to forever.

This books was another awesome installment of the Five Boroughs series. I absolutely loved returning to this couple. The story starts out with Raymond and David being somewhat on the rocks in their relationship. David’s insecurities about the lack of attention from Raymond get the best of him. He falls deeper in the bottle but Raymond fails to see his perspective since he’s just trying to make it with everything he has on his plate. Though he’s in love with David, he still cannot bring himself to come out to everyone he knows, which David has trouble accepting. When one of Raymond’s colleges seems a bit to cozy with Raymond, David nearly goes out of his mind.

My Rating: I loved it!

Santino was raised by a conservative family, but he was anything but traditional. He grew up to be a smart-mouthed grunge kid, then a transient twentysomething, and eventually transformed into a guy who spends his days and nights writing romance with an edge.

Santino is a dedicated gamer, a former fanfic writer, an ASoIaF mega nerd, a Grindr enthusiast, but most of all he is a writer of LGBT fiction that is heavily influenced by the gritty, urban landscape of New York City, his belief that human relationships are complex and flawed, and his own life experiences.

To celebrate the release of Interborough, one lucky winner will receive $25 in Riptide Publishing credit! Leave a comment with your contact info to enter the contest. Entries close at midnight, Eastern time, on October 29, 2016. Contest is NOT restricted to U.S. entries. Thanks for following the tour, and don’t forget to leave your contact info! 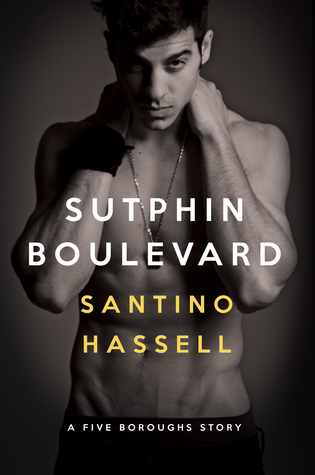 Michael Rodriguez and Nunzio Medici have been friends for two decades. From escaping their dysfunctional families in the working-class neighborhood of South Jamaica, Queens to teaching in one of the city’s most queer friendly schools in Brooklyn, the two men have shared everything. Or so they thought until a sweltering night of dancing leads to an unexpected encounter that forever changes their friendship.

Now, casual touches and lingering looks are packed with sexual tension, and Michael can’t forget the feel of his best friend’s hands on him. Once problems rear up at work and home, Michael finds himself seeking constant escape in the effortless intimacy and mind-blowing sex he has with Nunzio. But things don’t stay easy for long.

When Michael’s world begins to crumble in a sea of tragedy and complications, he knows he has to make a choice: find solace in a path of self-destruction or accept the love of the man who has been by his side for twenty years.

RATING:  Crazy about it!

Santino Hassell was raised by a conservative family, but he was anything but traditional. He grew up to be a smart-mouthed, school cutting grunge kid, then a transient twenty-something, and eventually transformed into an unlikely romance author.

Santino writes queer romance that is heavily influenced by the gritty, urban landscape of New York City, his belief that human relationships are complex and flawed, and his own life experiences.

To learn more about Santino you can follow him on: