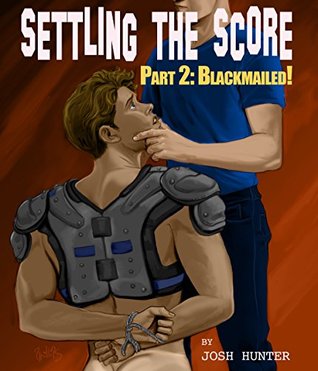 BLURB: Obedience training for a bully…

Wade Johnson is the golden boy jock at our school, the star quarterback– and a total jerk. He started calling me a “queer” back in ninth grade, and he and his football goons have been hassling me every day since.

But now I’ve got something to keep Wade in line– a video that could destroy his social life and end his football playing days for good.

You’d think Wade would keep that in mind, and try to stay on my good side. Play nice. Keep the other jocks from messing with me. But Wade’s not that smart.

At school, he’s still the same homophobic bully he’s always been. So after school, he has to make it up to me.

It’s almost like that guy wants to be punished.

REVIEW: The football players in this story are arrogant and entitled — and according to the school, they have every reason to be. That means that no matter who they choose to pick on, it’s up in the air as to whether or not anyone will actually stop them. Kev has what could be the perfect solution, if only his blackmailed football player would stand up for him. Unfortunately for him, it seems like Wade needs a few reminders as to just who’s in charge.

I really liked the first installment in this series, but I think Part 2: Blackmailed! was even better. Kev starts to get creative with just how he’s going to teach Wade a lesson, which makes it hotter and hotter, and I found myself rereading a few sections. For… research, of course. It was nice to see Wade’s reaction when he finally found something that reached his limits, though his reaction to just how Kev handles it when he balks was fantastic.

I don’t want to give away spoilers, because I enjoyed being surprised by just what happened. Suffice it to say that it gave a nice dose of kink and an idea of just where Kev might go next to keep his football player in line. Well-written and another enjoyable dose of Kev and Wade. I’m already ready to go straight into the next one. (Well. Straight. You know. ;-)) This might be short, but it packs a hell of a punch.