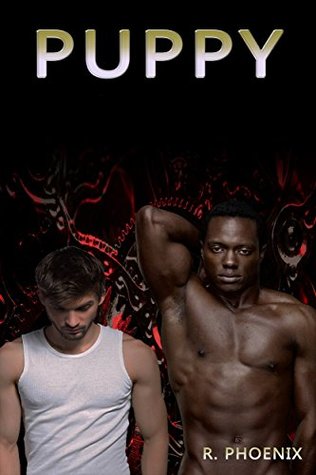 While other vampires glut themselves on the rewards of a world where humans are little more than food or entertainment, Liam has found himself bored with the new status quo. An attempt to alleviate his boredom brings him to Caleb, a man who’s willing to do what it takes to get out of the slums–even if it means becoming something less than human.

This was a short but delicious story. Since I’ve read a few of the author’s books set in the same world, it was very easy for me to fall into this book. Puppy begins with the four hundred-year-old vampire, Liam, out on the prowl for something to fit his tastes. In his world, human’s have pretty much lost their appeal, but when he finds Caleb, he sees the potential in him. Though Caleb is bisexual and a top when it comes to men, he’s quite turned on by all the demeaning things Liam wants to do to him.

Though I’m not that into puppy play, the way R. Phoenix presents it in this book makes it very appealing. I like that how Caleb is taken without given a choice about it, but he’s not so reluctant because everything Liam does to him is so arousing. Overall, this story was great. I was a little bit surprised when it ended, so my only complaint is that I wanted to see more of them together. I recommend this book to anyone who loves M/M Dark Erotica and fantasy.