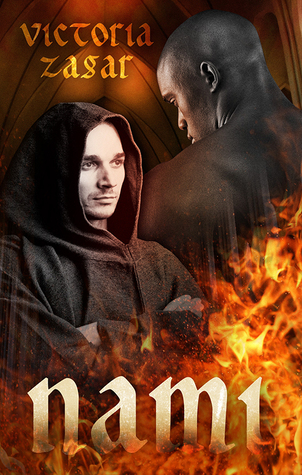 The Empire is sweeping the land, taking cities and towns by force. Nami, a young priest dedicated to the Goddess Ceres, is ready to sacrifice himself as Numidia falls, but his slave, lover, and protector Avan saves Nami from the temple flames against his will.

Alive and outraged, Nami travels to the city of Gran Terra to consult the Great Temple, but Avan’s love is changing Nami’s worldview. When he sees the Great Temple has become a hive of greed and indulgence, he challenges the idea of dying for a deity. However, the High Priest has another idea, and Nami will have to find every ounce of strength inside himself if he’s to escape the Temple alive with Avan by his side.

I’ve been thinking of reading this author for some time now. I decided to take a chance on Nami since it is pretty short and I have to say I wasn’t disappointed in any way. Avan is a slave who has been charged with sacrificing his master, Nami, to the gods. However Avan loves Nami too much to go through with it and saves him instead. The two flee but realize they have no money and nowhere to go. The end up in the hands of priests from another land who have much crueler practices.

I liked this book mostly for the world building. Though it was short, I really had a good feel for the fantasy world the author creates. Also, despite there being negligible character building, I liked and connected with the characters. As a side note, there is noncon in this story. However, it’s not graphic, gratuitous, nor is it used as a romantic device. This was a great story overall and I would recommend it to anyone who likes dark m/m fantasy.