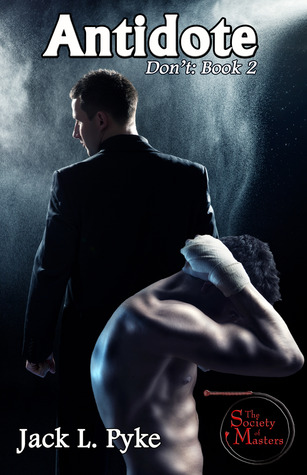 My god! I need more stars for this one. Five stars are not even close to being enough! Antidote is the third book I’ve read by the author and by far my favorite. The book begins with a glimpse of the three men’s happy world. Jack has his “okay” to return to being a master’s sub and they are all crazy about each other. However, before Jack can get back into it, he receives a disturbing video from his past. Then everything goes downhill when Jack and Jan wake up to find themselves abducted and in a nightmare. Even when it appears the nightmare is over, it’s not because the damage they’ve inflicted runs too deep.

I fell in love with this book from the beginning. There is so much angst and the situations are so intense. As they try to piece their lives back together, the pain they all endure over Jack’s trauma is just heartbreaking. Though Jack endures most of the torture, I really felt sorry for Jan and what he goes through.  I’m so glad I continued with this series. I wasn’t very attached to the first book, but now that I’ve read book 2, I can’t wait to read more. I highly recommend Antidote to anyone who loves m/m dark erotica with lots of angst.