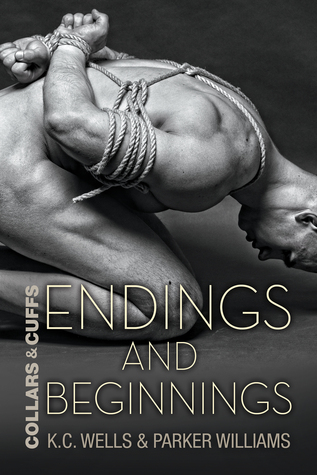 In all his relationships, Darren Fielding never found the level of intimacy he witnessed between Thomas Williams and his sub, Peter, the day of Peter’s “rebirth.” Not only that, he never realized such intimacy was possible. For two years, Thomas’s business card has been burning a hole in his wallet. When Darren’s lover moves on, maybe it’s finally time to see where that card takes him.

Collars & Cuffs’ new barman, JJ Taylor, is really conflicted right now. He went to the club with a very specific purpose, already convinced of what he’d find there. Except it’s not what he expected at all. He certainly didn’t anticipate finding himself drawn to the new wannabe Dom. Nor could he have guessed the direction that attraction would lead him.

Old love, new love, vows, pain, rage, moving in, moving on…. The members of Collars & Cuffs face an event that touches some of them deeply, but it will only reinforce what they already know: together they are stronger, and some bonds cannot be broken.

Endings and Beginnings starts off with an introduction to Darren and how he ends up in Collars and Cuffs as well as an introduction to JJ’s situation. At first JJ wasn’t very likeable. He’s full of bitterness and misdirected anger, but once he and Darren come together, it’s so easy to overlook JJ’s personality flaws. Darren adores him no matter who he is. As the story progresses, JJ’s past comes back to haunt him, which really made me sympathize for him. At the same time, some of the other characters are wrapping up unfinished business.

In short there are plenty of surprises in this book, and considering it is book eight in a series it wasn’t difficult in the least to read. It was great seeing all the characters pop in and out, and there are plenty of tie-ins to previous books that make things come together smoothly. Though it was nice visiting the previous characters, I was drawn mostly to the love affair between Darren and JJ as well as the drama related to JJ’s identity. I also loved the ending; especially the hint that there may be another tie in series to come. Overall, this book was a great way to end Collars and Cuffs.