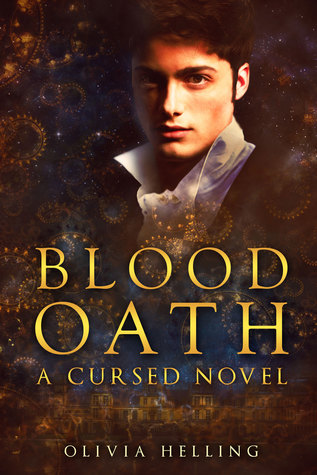 His sins may end up killing him. But which sins will they be…

Daniel Travere is a failure in his father’s eyes. Gaining his father’s love is going to take more than getting into the famed Sorcerer’s Guild. He knows he’ll also need to stamp out his most forbidden sin of all: loving other men.

Partnered with the perfect Valere Braud for an initiation project, Daniel must fight off dreams of kissing his handsome partner. When Daniel learns that Valere has sins of his own, including laying with other men and consorting with the god-cursed vampires, he’s pulled into a world that could ruin the lives of everyone he loves.

Daniel has a choice: shatter his life to get his father’s approval or confront his fear and claim his true destiny.

Blood Oath is a gay dark fantasy novel set in a world where homosexuality and vampires are equally scorned. If you like dark fantasy creatures, steampunk settings, and endings you don’t see coming, then you’ll love Olivia Helling’s dark novel of desperation, obsession, and hope.

Daniel is struggling to do his best in school. His biggest desire is to get into the sorcerer’s guild and make his father proud. However, his fear of disappointing his father is not his only worry. Daniel is also afflicted with a desire for another of his classmates, Valere, who happens to be a man. Daniel cannot stand the thought of failing nor can he endure being labeled a sodomite. However, when events move Daniel and Valere closer to one another, Daniel’s troubles multiply.

What I loved the most about this book was the very dark atmosphere. I rarely read books that can pull that off, but darkness the author creates was literally chilling. Though blood Oath starts off in a sorcery class, I was surprised when vampires come into the picture. I was particularly fond of the sexual tension in the beginning, and was thrilled with the action packed ending. There were also some parts that were somewhat shocking considering the tone of the book leading up to the events. If this book were to have any warning, it would be that it should be considered suspense/fantasy rather than romance. Daniel’s character seemed very real to me and I commend the decisions he makes which I can’t go into without giving spoilers. Overall, this was an awesome read.