TITLE: The Complications of T 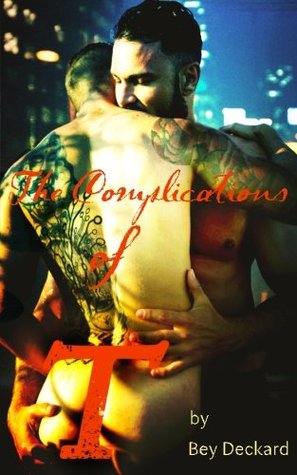 Stuart Leandro knows he’s washed up, both on the big screen, and in his marriage. Then, when things take an even bigger turn for the worse one night, he winds up blind drunk and lost in a foreign city.

Thankfully, someone’s there to rescue him before his face ends up plastered all over the tabloids.

Wary of the motives of the reclusive stranger who brings the fading star into the quiet shelter of a hip but isolated loft, Stuart nonetheless can’t deny his curiosity… Or his attraction. Tim is unlike anyone the actor has ever met, but underneath the mystery and quiet attempts at invisibility, Stuart discovers someone whose life has been intertwined with his own for years.

Neither could have predicted that Tim’s act of kindness would lead to one of the most intense encounters of their lives—but, are they willing to weather the media storm their extraordinary relationship will cause?

This book was extremely sweet as well as erotic. The story begins when an actor, Stuart, wakes up in someone’s house after he went on a drinking binge. Stuart thinks at first that he’d had sex with the person, and he also imagines the person is a woman. However, when he realizes that Tim is actually a transsexual man, he’s intrigued. Stuart finds out that Tim has been one of his biggest fans as well as a critic that he’s very familiar with. As they get to know one another, Stuart cannot deny his attraction for Tim. They come together and realize their feelings are something they cannot bear to hide or do without.

It’s not often that I read transsexual romance or trans erotica, so this book was definitely different for me. Tim was so androgynous that it was hard at first to visualize him being a man, but in the end, it really didn’t matter. The book was hot. I especially loved how Stuart didn’t judge himself for desiring Tim. Even though he’d never imagined being with a trans man before, he is comfortable enough with his sexuality that he doesn’t have to judge himself or over analyze the situation. He just goes with his heart without worrying about all the rest. I commend the author for stepping out of his usual genre with this book; something I hope to see more m/m authors do. I recommend The Complications of T to anyone who loves GLBTQ Erotica and M/M Romance.