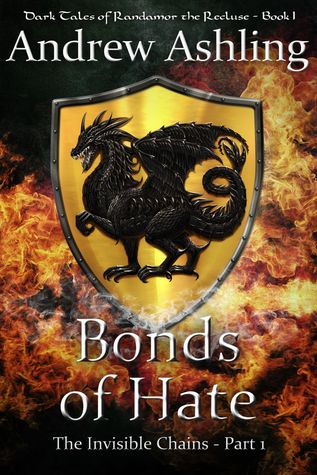 While the kingdom of Ximerion is threatened at its southern border by a major power, the high king sends his two youngest sons, the half brothers Anaxantis and Ehandar, as Lord Governors to the Northern Marches where minor raids by wild barbarians are expected. Under the guidance of an old and trusted general, the king hopes to keep the young princes far from the major conflict in the south, while at the same time providing them with a valuable learning experience. The estranged half brothers are rivals, but soon they feel attracted to each other. As if this was not enough of a complication, they begin to suspect that they were set up by their own father. The result is a fierce struggle for power where the lines between hate and love become almost indistinguishable and where nothing is what it seems.

Dark, very dark, but such an awesome discovery. I love finding a series like this; one that I want to keep reading non-stop until the very end. Bonds of hate is a story about two princes with a love hate relationship. I don’t like spoilers so I won’t say much. Just that I’m in love with the young prince Anaxantis, but I fear for him. How far will he fall into darkness before he heals from his wounds. I hope he can find a way to forgive before he becomes the monster he despises. Although this book ends at a suspenseful crossroads, I’m in no way disappointed. I’m hungry for more, so I’ll definitely keep reading.

Review: Bonds of Fear (The Invisible Chains #2) by Andrew Ashling

One thought on “Review: Bonds of Hate (The Invisible Chains #1) by Andrew Ashling”